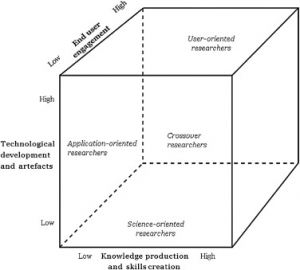 In his 1997 book1 , the late Donald Stokes introduced the very influential ‘Pasteur’s Quadrant’ model to capture one of the core dualities in contemporary science: motivations to conduct or fund science can be driven by curiosity (‘basic research’) but also by pursuing practical applications (‘applied research’).2  Stokes referred to research activities that cover both angles as ‘use inspired’.

With modern science increasing being pushed, by its funders, towards producing useful applications for the common good – either technological and social innovations, or commitment to help solving societal and environment problems – it seems that we need ever more ‘Pasteur type’ researchers who are also driven by utility and user needs. And with current strategic interests within research-intensive universities shifting more and more towards ‘impact’, ‘excellence’ and ‘innovation’, one would expect that executive levels and their human resources managers would like to know more about these use-inspired researchers within their midst. And of course, policymakers at regional or national levels could also benefit from a better understanding of such productive human capital within their science and innovation systems.

Given their increasing relevance, surprisingly little systematic information is collected about this interesting subspecies of academic researchers. Some empirical studies have adopted self-classification approaches and produced mixed results; the opinion-based information tend to be messy and difficult to transform into a convincing typology of researcher categories.3  The alternative information-gathering approach is to collect objective, empirical information that speaks directly to the concrete activities and achievements of researchers. A series of such empirical studies have been done over the last decade, focused mainly on Eastern Asia.4  The findings are remarkably consistent: ‘use-inspired’ academic researchers also tend to be very productive and highly cited in international science. Which begs two questions: does the picture look the same in Europe? And what makes these researchers such ‘superstars’?

To tackle these questions, I developed a conceptual model as well as a typology and taxonomy that may help identify and track Pasteur type researchers at universities.5  The conceptual model consists of three main attributes (‘dimensions’) to characterize each individual researcher: ‘knowledge production and skills creation’; ‘technological development and artefacts production’ and ‘end user engagement’. Summarizing, the first dimension relates to ‘science’, the second to ‘technology’. The third dimension taps into research commercialization, academic entrepreneurship, and related socioeconomic impacts. Stokes’ 2-D model is extended and upgraded to a 3-D ‘Pasteur’s Cube’, specifically designed for collecting and analyzing comparative empirical information.

Two dedicated ‘proof of concept’ studies were launched to test the analytical power of this PC model. First, a 2015/2016 European survey, administered across some 150 universities, to collect general information on research performance profile across various Pasteur types, irrespective of the researcher’s field of science, academic background, or current employer, or other important variables. Next, an in-depth case study of Leiden University (Netherlands) took a closer look of the patterns within a common organizational context. The typology tested three main classes of use-inspired researchers: ‘Inventor’, ‘Entrepreneur’, or ‘Crossover Collaborator’. 6 The latter cooperate regularly with industrial partners. A tiny minority are all three simultaneously. The other ‘conventional’ researchers were none of the above.

The joint findings, covering more than 900 researchers, show a large variety of use-inspired researchers within universities. There are significant differences between the classes, both in terms of scientific output and citation impact. Addressing the key research question (who are the ‘star scientist’ Pasteur types within this diversity?) both studies clearly point in the same direction: the most prolific, high-impact researchers tend to be Crossover Collaborators.

These first findings, although they only apply to a sample of European researchers, are encouraging. If the model holds across a wide variety of universities, in Europe and elsewhere, applying this analytical tool, especially within research-intensive universities, may help to classify researchers in a more transparent and systematic way. It may also provide a classification system to support forward-looking human resources management. More studies are obviously needed to assemble more conclusive evidence and verify the added value of Pasteur’s Cube model, which ultimately may also find its way to evidence-driven science and innovation policy debate - the arena where Pasteur’s Quadrant model still holds sway.

1 Stokes, D. (1997). Pasteur’s Quadrant: Basic science and Technological Innovation. Brookings Institution Press.
2 Louis Pasteur (1822-1895), a French biologist and chemist, is considered one the founding fathers of microbiology. He is renowned for his live-saving discoveries of the principles of vaccination, microbial fermentation and pasteurization.
3 See for example: Bentley, P., Gulbrandsen, M. and Kyvik, S., (2015). The relationship between basic and applied research in universities. Higher Education, 70, 689–709.
4 See for example, Baba, Y., Shichijo, N. and Sedita, S. (2009). How do collaborations with universities affect firms’ innovative performance? The role of “Pasteur scientists” in the advanced materials field. Research Policy, 38, 756–764; Wong, P. and Singh, A. (2013). Do co-publications with industry lead to higher levels of university technology commercialization activity? Scientometrics 9, 245–265.
5 Tijssen, R. (2018). Anatomy of use-inspired researchers: From Pasteur’s Quadrant to Pasteur’s Cube model. Research Policy (in press), doi.org/10.1016/j.respol.2018.05.010
6 An Inventor had at least one patent to his/her name; an Entrepreneur mentioned business activities or corporate affiliations on a personal webpage; a Crossover Collaborator co-authored at least one research publication with private sector partners.