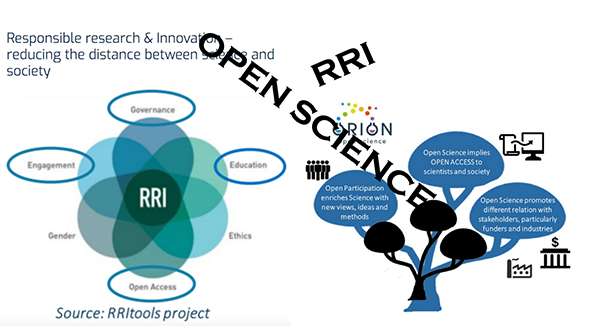 In European research and innovation policy, Responsible Research and Innovation (RRI) and Open Science (OS) encompass two co-existing sets of ambitions concerning systemic change in the practice of research and innovation. This paper is an exploratory attempt to uncover synergies and differences between RRI and OS, by interrogating what motivates their respective transformative agendas. We offer two storylines that account for the specific contexts and dynamics from which RRI and OS have emerged, which in turn offer entrance points to further unpacking what ‘opening up’ to society means with respect to the transformative change agendas that are implicit in the two agendas. We compare differences regarding the ‘how’ of opening up in light of the ‘why’ to explore common areas of emphasis in both OS and RRI. We argue that while both agendas align with mission-oriented narratives around grand societal challenges, OS tends to emphasize efficiency and technical optimisation over RRI’s emphasis on normative concerns and democracy deficits, and that the two agendas thus contrast in their relative legitimate emphasis on doable outcomes versus desirableoutcomes. In our conclusion, we reflect on the future outlook for RRI and OS’ co-existence and uptake, and on what their respective ambitions for transformation might mean for science-society scholars and scholarship.