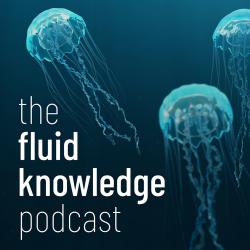 The first episode of the FluidKnowledge podcast is now up! In this first round of interviews, Sarah talks with thought leaders in ocean science about the role of funding, interdisciplinarity, and evaluation in ocean science, and about what it takes to work productively with policy makers on things that matter to the field.

The first episode is a conversation with Sheila Heymans, the Executive Director of the European Marine Board (EMB). What it's like to represent thousands of European marine researchers and large research organizations at the EMB?

Episodes will come out every month or so: look out for the second one at the end of September! Currently you can subscribe on Spotify and listen on the FluidKnowledge project website. Coming soon on Apple Podcasts.