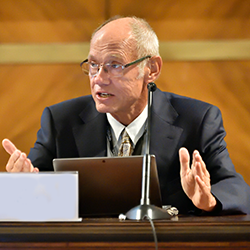 This weekend the sad news arrived at CWTS that Henk Moed passed away on Wednesday the 20th of October. Together with Ton van Raan, Henk was the founder of the Centre for Science and Technology Studies (CWTS), at that time LISBON, of the Leiden University. He was a researcher and Professor at CWTS between 1981 and 2010. In this period, he received his PhD and was awarded with the Derek de Solla Price Memorial Medal in 1999. In 2010 he moved to Elsevier, became visiting professor and received an honorary doctorate at the University Sapienza of Rome in 2019.

During his time at CWTS, Henk was the methodological brain. He developed many indicators and analyses for CWTS and for the field of scientometrics worldwide. With CWTS colleagues, he for instance developed an extensive register of academic organizations which is still being maintained and used for the Leiden Ranking and other analyses. Henk has had a great influence on research evaluation and the application of bibliometric techniques in assessing research. In Flanders, as well as in Italy and Spain, he has contributed significantly to the use of quantitative information in research evaluation, but always with great care, balancing expert judgment with research metrics.

Besides that he has been a great support to many researchers at CWTS and beyond. He was always open to discussing research approaches and ideas. He looked shy and prudent but was never afraid to express his opinion. His favorite quote at the end of his argument was “maar ik geef mijn mening graag voor een betere”, which means: but I will gladly give my opinion for a better one. But that rarely happened. With Henk the field of scientometrics has lost a great and creative mind, but also a wonderful colleague with a good sense of humor.