In addition, we also provide an indicator of overall open access publishing, combining the gold, hybrid, bronze, and green forms of open access. More information about the open access indicators made available in the Leiden Ranking 2019 is provided in a blog post by our colleagues Thed van Leeuwen, Rodrigo Costas, and Nicolas Robinson-Garcia. 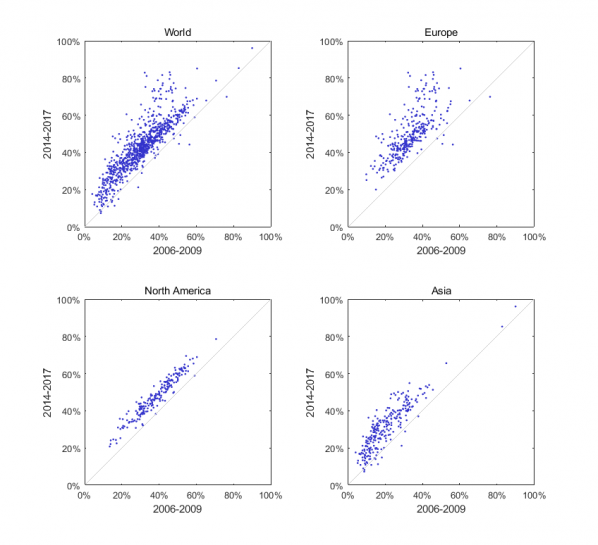 To obtain the gender indicators introduced in the Leiden Ranking 2019, we tried to determine for all publications of a university the gender of the authors affiliated with the university. This was done based on the first name of an author combined with the country of the author. We made use of Gender API together with Genderize.io and Gender Guesser. Only gender assignments with an accuracy of at least 90% were taken into account. When an accurate gender assignment could not be made, we considered the gender of an author to be unknown. More details on the gender indicator methodology can be found here. 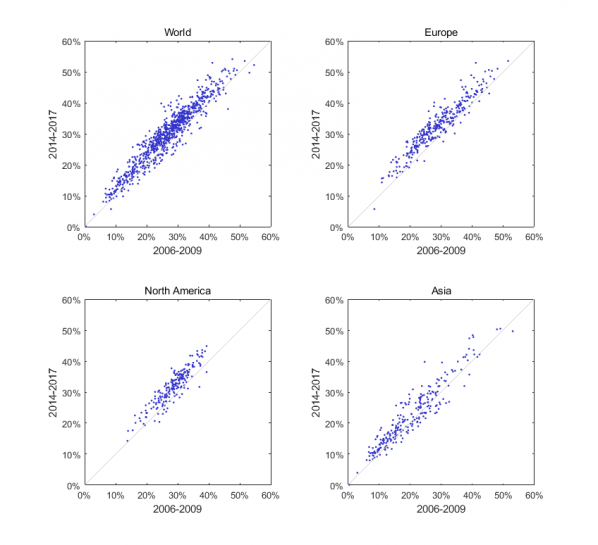 The gender indicators also reveal large differences between scientific fields in the share of female authors, with the share of female authors being much higher in the social sciences and humanities than in for instance mathematics and computer science. The indicators therefore partly reflect the disciplinary profile of a university. This is discussed in more detail in a blog post by Cassidy Sugimoto and Vincent Larivière, who present a more in-depth analysis of the gender indicators in the Leiden Ranking 2019.

The new indicators introduced in the 2019 edition of the Leiden Ranking provide large-scale systematic evidence to inform science policy discussions on open access publishing and gender diversity. The indicators can be used to trace developments over time within individual universities and to make comparisons between universities. The indicators may serve to demonstrate the need for institutional policies on open access publishing and gender diversity, and they may be used to evaluate the effects of such policies. We hope to add other similar indicators in future editions of the Leiden Ranking.

It is important to be aware of the limitations of the new indicators introduced in the Leiden Ranking 2019. The open access status of a publication cannot always be accurately determined, and there is no full agreement on the definitions of different forms of open access, such as gold, hybrid, bronze, and green. Likewise, gender assignments inevitably suffer from inaccuracies, and for a substantial share of all authors, we have not been able to assign a gender at all. Also, the open access and gender indicators in the Leiden Ranking 2019 have not been normalized to account for differences between scientific fields. The indicators therefore partly reflect field-specific patterns in open access publishing and gender diversity. In future editions of the Leiden Ranking, we expect to make further improvements to the newly introduced indicators. To support us in improving the Leiden Ranking, your feedback is always very much appreciated.