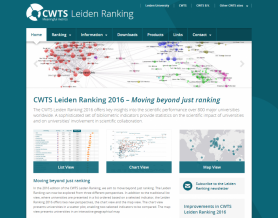 Today at CWTS we are releasing the 2016 edition of our Leiden Ranking. The CWTS Leiden Ranking is a web tool that provides a suite of bibliometric statistics for a large number of research-intensive universities worldwide. We try to design and construct our ranking in accordance with the most recent insights in the field of bibliometrics and scientometrics. New editions of the ranking therefore usually include improvements compared with earlier editions, for instance by refining the methodology, improving the presentation of the statistics, or increasing the number of universities included in the ranking.

In the 2016 edition of our ranking, the main improvement lies in the presentation of the bibliometric statistics. We emphasize a multidimensional perspective on the statistics and focus less on the traditional unidimensional notion of ranking universities. The approach that we have adopted is reflected by the motto of the Leiden Ranking 2016: Moving beyond just ranking.

The traditional approach to university ranking

As already mentioned, the guiding rationale for implementing changes in the 2016 edition of the CWTS Leiden Ranking is reflected by the Moving beyond just ranking motto. Compared with the 2015 edition, the new edition offers essentially the same information, but the presentation of this information on our website has been significantly revised. In addition to a traditional list-based presentation (list view), the website now also offers a chart-based presentation (chart view) as well as a map-based presentation (map view). The chart view enables comparing the performance of universities using two indicators simultaneously. Moreover, this view emphasizes the actual values of the indicators rather than the ranks implied by these values. The map view facilitates easy comparisons between universities that are geographically close to each other.

We hope you will appreciate the changes we have made in the new edition of the CWTS Leiden Ranking. As always, we very much appreciate your feedback, which is essential for future improvements of the ranking. Suggestions and comments can be provided by responding to this blog post or by contacting us directly using this contact form. We are looking forward to hearing from you! 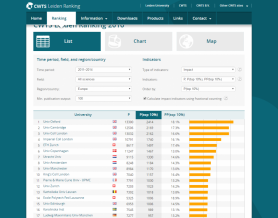 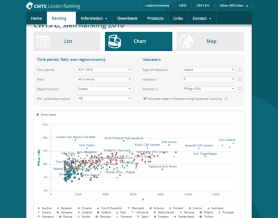 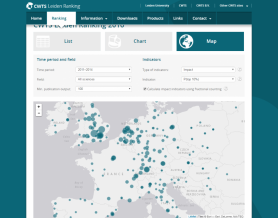 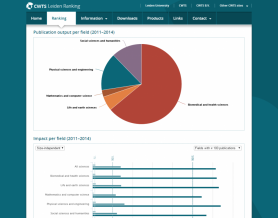 Professor of Scientometrics and Dean of the Faculty of Social and Behavioural Sciences. Paul is interested in how evaluation systems have developed and are creating new constraints for the development of knowledge. He is also interested in the history of science in general and the role of information systems in these histories in particular.