Today the paper A large-scale analysis of impact factor biased journal self-citations  by Caspar Chorus (TU Delft) and Ludo Waltman (CWTS) has appeared in PLOS ONE. In this blog post, the authors discuss their main findings and reflect on the implications of their research.

The journal impact factor (IF) plays a prominent role in many research evaluations. The IF of a journal essentially equals the average number of citations received in a certain year by papers published in the journal in the two preceding years. There has been quite a lot of controversy and debate about the IF, resulting for instance in the San Francisco Declaration on Research Assessment and in a high-profile paper advocating the publication of journal citation distributions. Despite these discussions, many research evaluations remain heavily dependent on the IF. In these evaluations, the IF of the journal in which a paper has appeared is usually seen as a proxy of the quality or impact of the paper.

Given the importance of the IF, it may be tempting for editors and publishers to try to increase the IFs of their journals, and sometimes they may try to do so in questionable ways. For instance, they may publish editorials with many journal self-citations, they may participate in citation cartels, or they may coerce authors to include additional journal self-citations in their papers, in particular self-citations to publications from the past two years.

Besides editors and publishers, authors may also behave strategically. When authors are planning to submit a paper to journal X, they may believe that the opinion of the journal’s editor about their work will be positively influenced by having many citations to recent publications in journal X in their paper. Authors may therefore decide to include additional citations to journal X in their paper, citations which they would not have included if they had submitted their paper to a different journal.

Are IFs indeed influenced by journal self-citation malpractices such as the ones discussed above, and how large is the effect of these malpractices? Systematic research into this question is scarce. The most important contribution is a paper published in Science in 2012. Based on the results of a survey, this paper shows that coercive citations are an ‘uncomfortably common’ phenomenon in some fields in the social sciences. 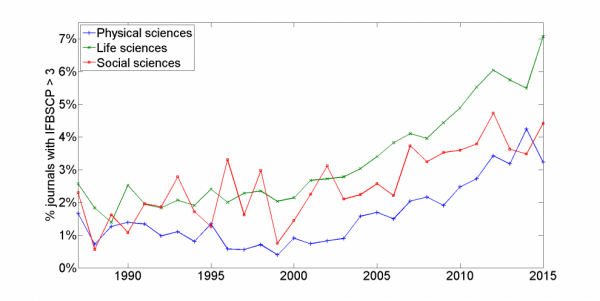 What do these findings tell us? There can be different reasons for an IF bias in journal self-citations. Self-citation malpractices are one possible reason. As already mentioned, editors may for instance coerce authors to include in their papers additional journal self-citations to the past two years. Alternatively, before submitting a paper to a journal, authors may strategically decide to include in their paper additional citations to the journal. However, as we discuss in our paper, there are also various perfectly legitimate reasons for an IF bias in journal self-citations. For instance, when recent work is cited, the citing and the cited paper typically can be expected to have a stronger topical relatedness than when older work is cited, and work that is topically related is more likely to appear in the same journal. This mechanism may explain why many journals have an IF bias in their self-citations.

Based on our analysis, it is not possible to distinguish between the various reasons that may explain why journal self-citations have an IF bias. However, looking at the time trend shown in the above figure, we do believe that our findings provide circumstantial evidence of increasing journal self-citation malpractices. The increasing trend shown in the figure follows, with a delay of a number of years, the increasing importance of the IF in research evaluations. The increasing importance of the IF is for instance visible in the increasing number of editorials about the IF. We also note that a relatively large share of all editorials about the IF appear in life sciences journals, suggesting that the IF is especially important in the life sciences. Life sciences journals indeed turn out to be the journals that most often have a large IF bias in their self-citations. Based on these observations, we consider it likely that our findings at least partly reflect journal self-citation malpractices.

When self-citation malpractices become more common, assessments of journals based on the IF will become less and less accurate and will be unfairly biased in favor of journals that engage in self-citation malpractices. More fundamentally, including non-relevant citations in papers harms the integrity of the scientific literature. It introduces noise in the literature, which may confuse and mislead readers. Rather than being fixated on a single metric, such as the IF, research evaluations need to take into account a more diverse set of metrics, thereby reducing the incentive to manipulate the IF. Publishers, editors, and authors should resist the temptation to opportunistically game the IF, and we should all actively remind each other of our ethical responsibilities in this matter.

Caspar Chorus is professor of choice behaviour modelling, and head of the Transport and Logistics Group at Delft University of Technology. His research and teaching focuses on increasing the behavioural realism of econometric models of human decision making, with particular focus on models of mobility-related choices. More information is available here.