Today we released version 1.6.6 of our VOSviewer software for constructing and visualizing bibliometric networks. The most important new feature in this version is the support for working with Crossref data. Recently, the Initiative for Open Citations (I4OC) managed to convince a large number of scientific publishers to make the reference lists of publications in their journals freely available through Crossref. Thanks to I4OC, Crossref has become a valuable data source for VOSviewer users. In this blog post, we discuss how users of the new version 1.6.6 of VOSviewer can benefit from Crossref data.

There are two ways in which VOSviewer supports the use of Crossref data:

The first approach is the easier one, since it does not require users to work directly with the Crossref API. When users already have DOIs of the publications they would like to analyze (e.g., publications included in their university’s research information system), we recommend using the first approach. The second approach is a bit more complex, but it has the advantage of offering much more flexibility. We will now explore the second approach in more detail.

To demonstrate the use of the Crossref API, we collect data on publications in two scientometric journals, Journal of Informetrics and Scientometrics, in the period 2007-2016. In each API call, data can be obtained for at most 1000 publications. We therefore need to make multiple API calls. We choose to make separate calls for each of the two journals.

The URL specifies a request for the Crossref API. The API request includes the ISSN number of Journal of Informetrics (i.e., 1751-1577) as well as the begin date and the end date of the time period that we are interested in. The rows parameter in the API request indicates that we would like to receive data for up to 1000 publications. By entering the above URL in a web browser, we make a call to the Crossref API requesting data on all publications in Journal of Informetrics in the period 2007-2016. After waiting for some time, the web browser will present the result of the API call. We save this result in a file called JOI.json. This is a so-called JSON file.

We follow the same approach for Scientometrics. However, Scientometrics is a larger journal, and we therefore need to make three API calls, each of them resulting in data for at most 1000 publications. We use the following URLs:

The three API calls are identical except that in the second and the third call we use the offset parameter to specify that we want to obtain data for a second and a third batch of publications. We save the results of the API calls in three JSON files.

We first use the downloaded Crossref data to visualize a co-authorship network of researchers in the field of scientometrics. In the Create Map wizard in VOSviewer, we choose the option Create a map based on bibliographic data. In the second step of the wizard, we go to the Crossref JSON tab, where we select the four downloaded JSON files. After choosing to perform a co-authorship analysis, we simply use the default choices in the remaining steps of the wizard. The visualization of the resulting co-authorship network is presented below. 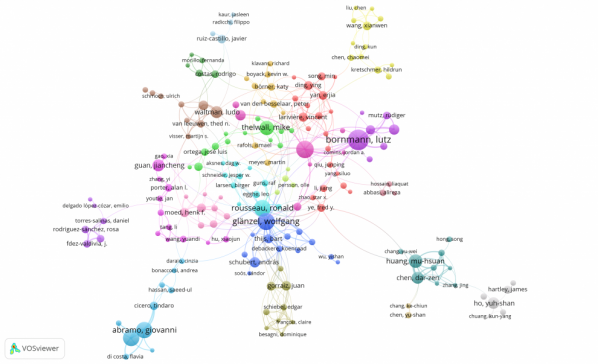 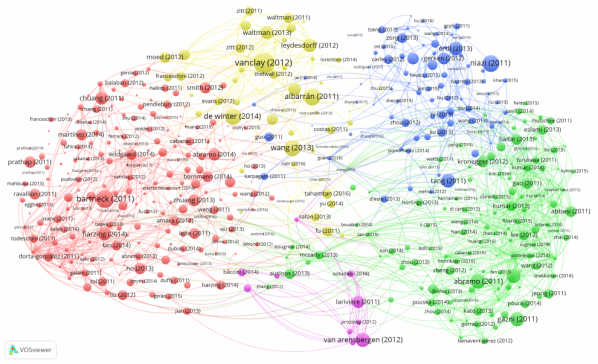 Using the Crossref API, we downloaded data for all publications in the period 1980-2016. The amount of data was very large, and the data therefore needed to be preprocessed before it could be provided as input to VOSviewer. The data was stored in a relational database. Using this database, we identified all journals (as well as conference proceedings and book series) that have at least 100 publications for which a reference list is available. We then constructed the network of citation links between the identified journals. The direction of a citation link was ignored, so no distinction was made between a citation from journal A to journal B and a citation from journal B to journal A. The journal citation network was saved in a VOSviewer network file, and this file was used as input for VOSviewer. In VOSviewer, the 5000 journals with the largest number of citation links with other journals were selected and the citation network of these 5000 journals was visualized. The resulting visualization is presented below. An interactive visualization can be opened in VOSviewer by clicking here. 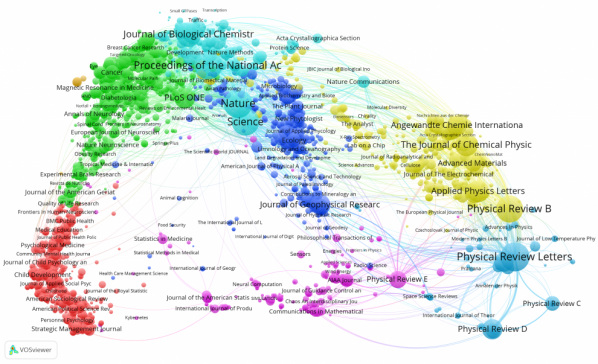 Thanks to I4OC, Crossref has become a valuable source of freely available citation data. Crossref citation data can be used for many purposes, including the analysis and visualization of citation networks of journals, researchers, and individual publications. Version 1.6.6 of VOSviewer provides direct support for the use of Crossref data for visualizing citation networks. We hope that this new functionality of VOSviewer offers a convincing demonstration of the value of freely available citation data. We encourage publishers that do not yet participate in I4OC to join the initiative and to make the reference lists of publications in their journals freely available.