Crossref as a new source of citation data: A comparison with Web of Science and Scopus

The Initiative for Open Citations (I4OC) encourages scholarly publishers to make the references found in their journals and books openly available through Crossref. With a few exceptions (most notably the American Chemical Society, Elsevier, IEEE, and Wolters Kluwer Health), almost all large publishers support the initiative. So far, this support has resulted in approximately half of all references deposited in Crossref being openly available, yielding about half a billion open references.

I4OC has attracted widespread attention. The initiative is of particular importance for the scientometric community. Thanks to I4OC, Crossref has the potential to become an openly available source of citation data covering a large share of all scholarly literature. I4OC has been endorsed by CWTS and the International Society for Scientometrics and Informetrics. Last month, an open letter from the scientometric community was published calling for publishers to open their references. This letter has already been signed by nearly 300 individuals.

At present, scientometricians typically obtain citation data from Web of Science (WoS) and Scopus, two proprietary data sources. In this post, we provide empirical insights into the value of Crossref as a new source of citation data. We compare Crossref with WoS and Scopus, focusing on the citation data that is available in the different data sources. Our analysis will show that more than three-quarters of the references in WoS and more than two-thirds of the Scopus references can be found in Crossref, with about half of these references being openly available. On the other hand, it will also be shown that millions of references are missing in Crossref. These references occur in publications that have been deposited in Crossref without their references.

Matching Crossref with Web of Science and Scopus

Table 1. Number of publications in WoS and Scopus, with a breakdown based on whether a publication has a DOI and whether it has a Crossref match (in millions; period 2012–2016).

In addition to Crossref, there are also other organizations that register DOIs. This causes another complication in matching. As shown in Table 1, of all publications in Scopus, 4.0% cannot be matched with Crossref even though they do have a DOI. We performed a manual examination of a small sample of these publications. In about half of the cases, a DOI was registered not with Crossref but with another organization, such as the China National Knowledge Infrastructure (CNKI). In other cases, DOIs in Scopus are incorrect (i.e., different from DOIs reported on publishers’ websites), DOIs were never registered, or registration was not yet completed when the Crossref data was downloaded. As can be seen in Table 1, the number of publications in WoS with a non-matching DOI is relatively limited.

Comparing citation data in Crossref with Web of Science and Scopus 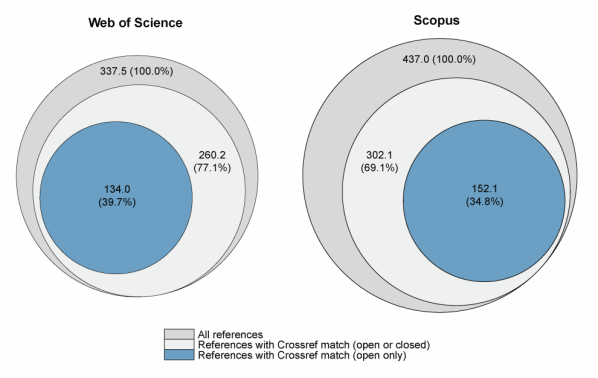 Figure 1. Number of references in WoS and Scopus, with a breakdown based on whether a reference has a Crossref match and whether it is open or closed in Crossref (in millions; period 2012–2016).

As shown in Figure 1, 77.1% of the references in WoS have a matching reference in Crossref, but only 39.7% of the references in WoS have a matching reference that is openly available. For Scopus these statistics are somewhat lower, 69.1% and 34.8%, respectively. It needs to be emphasized that these results are likely to underestimate the true overlap in terms of references between WoS and Scopus on the one hand and Crossref on the other hand. Because of missing and incorrect DOIs in WoS and Scopus, our matching of Crossref with WoS and Scopus is incomplete, leading to an underestimation of the overlap between the different data sources. Both for WoS and for Scopus, Figure 1 shows that slightly more than half of all references with a Crossref match are openly available. This is in line with overall statistics reported for Crossref, where about 50% of all references are found to be open. 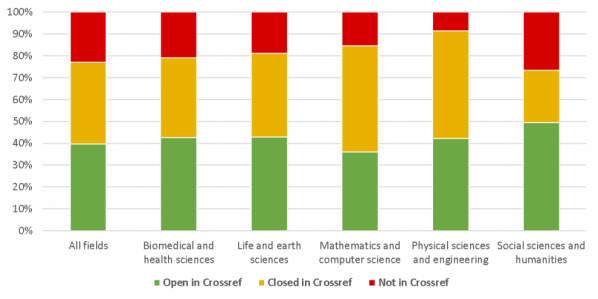 For the period 2012–2016, for each source (i.e., journal, book series, or conference proceedings) in WoS and Scopus, the number of publications and references that can be matched with Crossref is reported in this Excel file (see the worksheets Crossref vs. WoS and Crossref vs. Scopus; sources with fewer than 100 publications are omitted). The statistics reveal an interesting result: Focusing on the sources with the largest numbers of references that cannot be matched with Crossref, we observe that for most of these sources a large share of their publications do have a match with Crossref. Hence, publications in these sources have been deposited in Crossref, but the corresponding references have not. We investigate this issue in more detail below.

Discussions about the Initiative for Open Citations (I4OC) have focused mostly on references that have been submitted to Crossref. So far, little attention has been paid to references that are missing in Crossref. These are references that have not been deposited in Crossref, even though the publications in which they occur have been deposited. It is clear that missing references may significantly reduce the value of Crossref as a source of citation data. To a certain extent, the issue of missing references may also explain why some references in WoS and Scopus do not have a match with Crossref, as discussed in the previous section.

Table 2. Number of references in Crossref, and number of missing references, based on comparisons with WoS and Scopus (in millions; period 2012–2016). 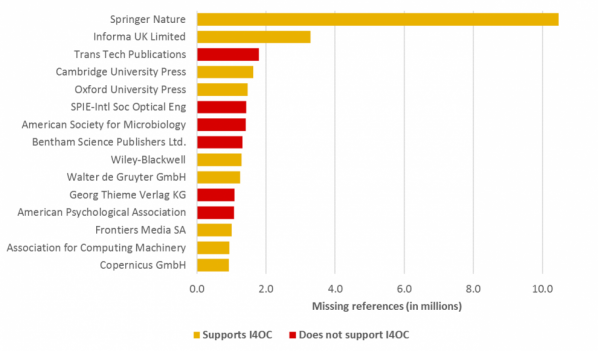 Figure 3. Top 15 publishers with the largest number of missing references in Crossref, based on a comparison with Scopus (in millions; period 2012–2016).

A large share of the scholarly literature indexed in WoS and Scopus is also available in Crossref. For recent years, 68% of the WoS publications and 77% of the Scopus publications can be matched with Crossref using DOIs as a crosswalking mechanism. These figures are likely to underestimate the true overlap between the data sources, since matching based on DOIs presents several difficulties, such as missing, incorrect, and duplicate DOIs. To improve matching, publishers and data providers need to work together to offer more comprehensive and more accurate DOI data.

Several next steps are needed to take full advantage of the infrastructure offered by Crossref. Many references are either closed or missing in Crossref. We therefore call for publishers to deposit their references in Crossref and to make them openly available. Moreover, the quality of reference data in Crossref can be improved. For instance, there is no standardized format for author names, and DOIs appear to be missing for a significant share of the references. Also, quite a lot of references are incomplete, with missing data for some or even all elements of a reference (e.g., author name, journal title, publication year, etc.). Publishers should work together with Crossref to improve the quality of reference data. Finally, we urge scientometricians to perform more in-depth studies of the data available in Crossref, to investigate possible systematic differences between references that are open and closed (e.g., in terms of geography, language, and research area), and to assess the suitability of Crossref data for different types of scientometric analyses.

Thanks to David Shotton for his comments on an earlier version of this post.