Today VOSviewer version 1.6.5 has been released. This new version of our software tool for constructing and visualizing bibliometric networks includes many improvements. In this blog post, we discuss some of the more important improvements. We also look ahead and discuss some anticipated future developments related to VOSviewer. 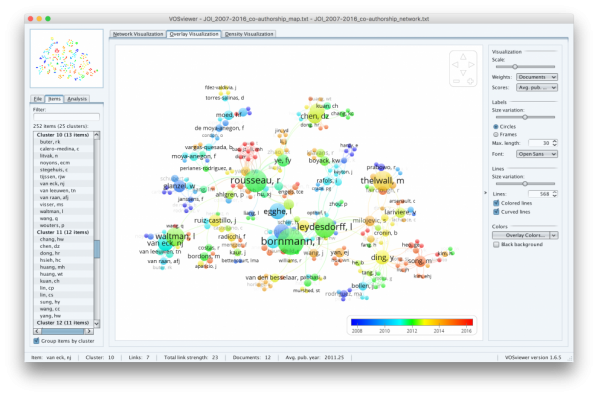 Other improvements made in version 1.6.5 of VOSviewer include the use of the status bar to provide information on an item when hovering over the item in the visualization. The status bar presents various statistics on an item, such as the number of links with other items and the total strength of these links. Previously, the so-called information panel was used to provide information on items. Although this panel can still be used, it has been largely replaced by the status bar. In this way, more space has become available in the VOSviewer user interface for presenting the visualization of a bibliometric network.

Many other smaller improvements have been made, for instance relating to the construction of bibliometric maps based on Web of Science and Scopus data, the support of the GML file format (which allows VOSviewer to exchange data with other network analysis tools, such as Gephi), and the visual quality of the density visualization. When downloading VOSviewer, a full list of all improvements that have been made is provided in the history file.

The use of VOSviewer keeps increasing. There are two main groups of VOSviewer users: (1) researchers who are interested in creating bibliometric visualizations of specific scientific fields or specific research topics and (2) people working at research institutions, research funders, and scientific publishers who use VOSviewer to support strategic decision making. Based on the feedback we receive from the VOSviewer user community, our impression is that both groups of users keep growing. In the case of the first group of users, a clear impression of this growth can be obtained by looking at the yearly number of publications in which VOSviewer is used. As can be seen in the graph presented below, the number of VOSviewer publications has grown exponentially since the first release of VOSviewer. In 2016, almost 100 VOSviewer publications have appeared so far. 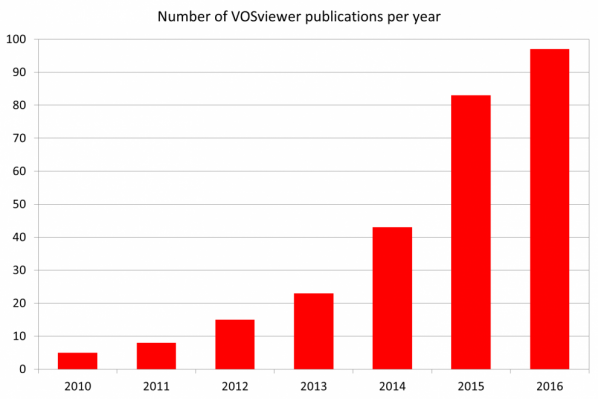 An example of other interesting VOSviewer-related developments is the Automatic Identification of Research Trends (AIDA) project at Delft University of Technology. In this project, researchers are trained in the use of VOSviewer to support literature reviewing, proposal writing, and other related tasks. This is quite similar to the two-day VOSviewer course that we offer at CWTS once every year. The fifth edition of this course will take place on April 6 and 7, 2017. More information on the course is available here.

As developers of VOSviewer, we receive a lot of feedback on our software. In the development of the software, we try to take into account the most interesting and most important suggestions made by the VOSviewer user community. In the next version of the software, we expect to make further improvements to the interactive visualizations presented by the software. By adding more visual effects, we hope to further increase the value of the visualizations. We are also planning to make VOSviewer available as open source.

In the meantime, we are thinking about a longer term strategy for the development of VOSviewer. We are currently preparing the first plans for VOSviewer version 2.0. Our idea is that VOSviewer version 2.0 will offer support for very large networks (e.g., citation networks of millions of publications) and will be able to handle hierarchically organized networks using interactive ‘drill down’ functionality (similar to the 'drill down' feature available in our CitNetExplorer tool). Although VOSviewer’s special focus on bibliometric networks will remain, we expect VOSviewer to gradually evolve toward a more general purpose network analysis and visualization tool.

We very much appreciate your feedback on VOSviewer. If you have questions, comments, or suggestions, then please do not hesitate to contact us!