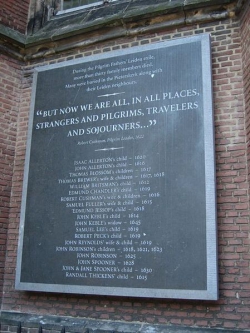 “But now we are all, in all places, strangers and pilgrims, travelers and sojourners…” Robert Cushman, Pilgrim Leader, 1662 (inscription at Pieterskerk in Leiden, the Netherlands)

In a paper published this week in Nature, we discuss the usefulness of bibliometrics for tracking and identifying global scholarly mobility. Our approach is rooted in the idea that mobility is a complex phenomenon. The more traditional analyses of brain drain and brain gain do not necessarily reflect the diversity of mobility patterns. Bibliometric data provides an opportunity to capture the multiple facets of mobility in a timely manner and at scale (Moed & Halevi, 2014).

Mobility of human capital is particularly important for the exchange of ideas, technology, and knowledge (Akerblom, 1996). However, ongoing changes in the political climate of some of the most scientifically advanced nations have made the future of scientific mobility uncertain. The recent travel bans issued by US President Donald Trump and the consequences of Brexit in the UK are expected to increase barriers for many scholars to visit and work in these countries. Current political actions open the question as to whether the flow and exchange of scholars across the world will be sustainable in the years ahead.

How can bibliometrics be used to track international scientific mobility?

The need for valid indicators that can track mobility at scale and in real time has been a pervasive policy need. Bibliometric data opens a unique window into the analysis of mobility flows of researchers across continents, countries, regions and institutes. Mobility can be observed through the linkages that authors establish with different affiliations during their publishing careers. These links are recorded in their publications, indexed in bibliographic databases, enabling analyses in a global, timely, and systematic way.

Scholars may change affiliations during their career, or accumulate new affiliations with countries (e.g., through co-affiliations, multiple appointments, visiting professorships, etc.), without necessarily breaking ties with their country of academic origin. As a result, we observe at least three forms of mobility: (i) migrants: those who break ties with their origin; (ii) directional travelers: those who add affiliations without breaking ties to the origin; and (iii) non-directional travelers: those with multiple affiliations which remain constant over time. Nomadism, cosmopolitism, and globalization are intrinsic traits of modern science (Scott, 2015) and more nuanced perspectives on mobility can also demonstrate the different roles countries play—as producers, cultivators, incubators, and recruiters—in the circulation of high performing scholars. These new perspectives can facilitate policy-relevant discussions that transcend the more limited perspectives of brain drain/brain gain, in which countries lose and win depending on the balance between scholars who left or came over the years.

Grasping the multiple faces of mobility in the Netherlands

As an illustration, Figures 1 and 2 present mobility flows between the Netherlands and the top ten countries with the strongest mobility ties with the Netherlands. The analysis is restricted to mobile scholars (with directionality) who started or ended in the Netherlands between 2008 and 2015 (a total of 1,100 scholars). Figure 1 shows that the most important destination countries for Dutch mobile scholars include the US, UK, and Germany, which are also the most important countries sending scholars to the Netherlands (Figure 2). Additionally, Figure 2 shows a sizable proportion of researchers who started in the Netherlands, held affiliations with intermediate countries in 2011, before finally returning to the Netherlands in 2015, reinforcing the notion that researchers circulate. But this circulation is not uniform for all of the Netherlands’ linked countries: while Dutch scholars circulate among the most scientifically advanced countries (US, Germany, UK or Switzerland), there is almost no circulation with countries such as Spain or Italy. In our study, we show that these and other circulatory imbalances are often consistent with countries that have suffered a loss in their academic workforce during the period of study. Global scientific mobility is dynamic and volatile, changing with the tides of policy and current events; bibliometric data makes it possible to track these changes and to better understand circumstances and consequences of mobility. 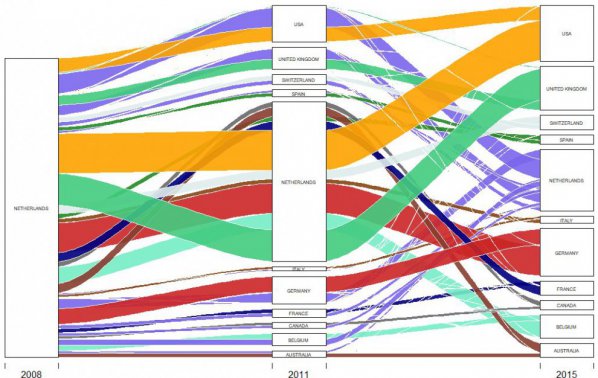 Figure 1. Mobility flows of Dutch early career researchers to the top 10 countries with most ties to the Netherlands. 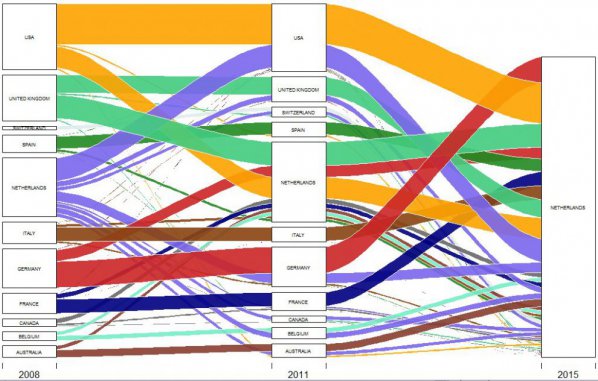 Bibliometrics provide a valuable lens for studying worldwide mobility patterns, even if subject to limitations (e.g., coverage limitations of bibliometric databases, effects of publication delays, errors in the disambiguation of authors, etc.). With bibliometric mobility indicators, a new window opens that allows for richer perspectives to be gleamed from the study of the interactions and relationships formed by the exchange of individuals. These methods open the possibility of analyzing the incentives, constraints, and effects that different mobility patterns may have on particular groups from an intersectional perspective—for example, by examining the varying characteristics and dynamics of women’s mobility between particular countries and regions. Furthermore, bibliometrics allows for naturalistic studies of the effects of policies on particular countries and institutions —analyzing how countries form international relationship via the exchange of scholars and the impact of restrictive foreign policies, international embargoes, and isolationism.

Although our study shows that migrants and mobile scholars exhibit higher impact than their non-mobile counterparts, it is difficult to discern the causal effects of such findings. Are highly cited scholars more prone to be migrant, or are they highly cited because they are migrant? Any such claim may never be conclusive, but our data contributes evidence that reinforces the relationship between mobility and citedness.

As political and social changes impact the global scientific ecosystem, there is a need for new methods and tools to monitor, study, and make sense of global flows of scholars. It is now more important than ever to understand the consequences of increasing barriers that challenge the free circulation of individuals and knowledge.