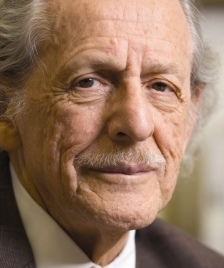 With sadness in our hearts, we report that we have lost a great colleague and friend: Eugene Garfield passed away Sunday 26 February 2017 in Philadelphia at the age of 91. His invention of the Science Citation Index (SCI), the predecessor of the Web of Science (WoS), revolutionized the world of scientific information and made him one of the most visionary figures in information science and scientometrics. He founded Current Contents as an alerting service database in which he also published his thought provoking essays about virtually all aspects of scientific and scholarly research. In 1960, he created the Institute for Scientific Information (ISI) to develop the SCI and related databases such as the Social Sciences Citation Index and the Arts and Humanities Citation Index.

Garfield pioneered the method of citation indexing with relentless energy. Already in the 1950s he wrote his first papers on citation indexes and the techniques to realize a citation database. Very influential was his seminal paper in Science (Garfield, 1955), followed by his famous book (Garfield, 1979). Citation indexing, the systematic collection and registration of all references in all publications in a large number of scientific journals, enables researchers to find out how their articles are cited, and who has cited them. This was the original goal of the SCI. Soon it became clear that this new bibliographic database also opened the way to carry out citation analysis of scientific publications on a large scale. Although Garfield was ambivalent about the use of the citation index for research evaluation, the SCI became a powerful source for the measurement of the impact of publications. It enabled the rise of bibliometrics as a policy oriented empirical field. Garfield also recognized another potential application of citation analysis: journals can be ranked by citation frequency for science policy purposes. He launched the idea of a journal impact factor, and created the Journal Citation Reports in which citation analysis is applied as a tool for journal evaluation. Again in Science he published his most highly cited paper on citation analysis as a tool in journal evaluation (Garfield, 1972). 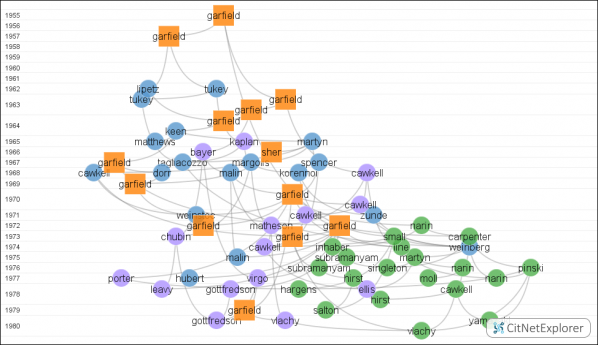 
Without the inventions of Gene Garfield our institute CWTS might never have been. In the end of the 1970’s, Cees le Pair, then director of research at FOM, the physics division of the Netherlands Organization for Scientific Research (NWO), became interested in measuring science and met Eugene Garfield during a visit to the US. Back in the Netherlands, he started one of the first citation analysis studies outside the US, in two fields of physics: magnetic resonance and electron microscopy. The Le Pair studies showed that citation analysis made it possible to identify the most important basic research contributions to these fields. Around the same time, the Leiden University Executive Board introduced a new institutional policy. The allocation model used to divide the block financing from the Ministry among faculties and institutes would no longer be exclusively dependent on student numbers but also have a research-quality dependent factor. The problem was to find a reliable method to assess research quality, or at least a strong indication of quality, for which "international impact" was chosen. One of us (TvR), a physicist who knew Cees le Pair, was involved in the development of the new allocation model and proposed to use citation analysis in the assessment of research performance. Garfield agreed to deliver the data and the first experiments were performed: a citation analysis of all chemistry departments, followed by a second citation analysis of the entire Faculty of Sciences and the Faculty of Medicine, combined with expert interviews. Never before had a bibliometric study been performed on so many (140) departments within a research-intensive university. This was the birth of the Leiden bibliometric research group, later institutionalized as CWTS.

However, Garfield's agenda and curiosity were much broader than bibliometric evaluation. In general, he was  fascinated with methods to discover information hidden in the enormous web of bibliographic data. He strongly supported the development at ISI of research to find citation-based structures, particularly co-citation patterns. For him, this fitted naturally with his collaboration with sociologists and historians of science, such as Robert Merton and Derek de Solla Price, with philosophers such as Yehuda Elkana, and with scientists such as Nobel Laureate Joshua Lederberg with whom he developed the first prototype of the SCI. Gene also liked the exotic side of bibliometrics. For example, after we in Leiden found that co-citation clusters exhibit a self-similar, fractal geometry, he enthusiastically responded that it would be interesting to find out self-similarity in music. He developed a software tool to use bibliometric data for the study of the history of science, an interest he already had in the early years of the Society for the Social Study of Science (4S) to which he contributed the Bernal Prize (1981).

In 1991 Gene Garfield visited our centre. We had many discussions on all kinds of scientometric phenomena, including first explorations of Sleeping Beauties. But he also wanted to see how the Dutch deal with water, as a friend, and sometimes as a terrible enemy. So together with the van Raan family and Cees le Pair he visited the Delta Works and the Oosterschelde Storm Surge Barrier. He was very impressed and said that if the Dutch can build this, they easily could manage a flourishing bibliometric research institute. And so we did.

In 1992 Eugene Garfield decided to sell his Institute of Scientific Information. After a few years of different owners, ISI became part of the information giant Thomson Reuters. Things began to change gradually, with research becoming more and more determined by business interests. The Hungarian scientometrician Tibor Braun called this the end of the romantic period for the bibliometric world.

But the study of science and technology keeps flourishing. In the future, we expect an increasing interaction between quantitative and qualitative data and approaches. Garfield would have enthusiastically applauded these new forms of synergy to which CWTS will keep contributing. We are proud and happy that we have known such a creative and energizing force.