Science in the Anthropocene

The Science in the Anthropocene hub is one of the research hubs at CWTS. This thematic hub is led by Thomas Franssen.

Human-induced  environmental change (i.e. anthropogenic change), including climate change, loss of biodiversity and ocean acidification (Rockström et al. 2009), is a cause of great concern for scientists, environmental organizations, and governments across the globe. Scientists warn of a climate in breakdown, causing the onslaught of the Earth’s sixth mass extinction (Ceballos, Ehrlich, & Dirzo 2017). The anthropogenic influences on the Earth’s entire system have become particularly visible in what is known as ‘the great acceleration’ (Steffen et al. 2015). Figure 1 shows how socio-economic trends and earth system trends have developed over the last 250 years. 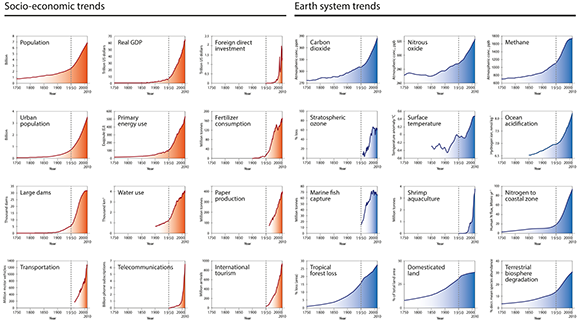 In our hub science in the Anthropocene we explore the ways in which entering the Anthropocene is changing the sciences and humanities. Scientists have been actively studying anthropogenic influences on the Earth as early as the 19th century, with fields such as meteorology having played a critical role in the development of knowledge infrastructures, which enabled the study of climate-relevant fields and phenomena, e.g. climate change (Friedman 1989; Edwards 2010). Moreover, living in the Anthropocene also influences how science is done as well as how both scientists and scholars understand their role in society more broadly. Below we discuss four issues and their corresponding questions that the hub seeks to explore.

First, we aim to examine the creation and reforms of research fields in relation to anthropogenic change. New research fields have been emerging, including Earth system science (Steffen et al. 2020), Earth system governance (Biermann et al. 2019), and environmental humanities (Hall et al. 2015). Moreover, in other fields, scientists increasingly are orienting themselves towards issues related to the Anthropocene. For instance, climate migration is increasingly a topic for migration scholars and in material science and engineering the development of sustainable technologies is an increasingly central concern. One important question, raised by these developments, is:

How does the cognitive structure of science change in the Anthropocene?

Secondly, our research hubs seeks to investigate how anthropogenic research topics, particularly climate change, become priorities for governments and funding agencies. Governmental bodies are increasingly steering research towards public policy goals. Currently, the UN Sustainable Development Goals are of particular importance for science policy, including goals such as: climate change mitigation, clean water, affordable and clean energy, responsible consumption, and biodiversity in the ocean as well as on land. The missions of Horizon Europe are another example of governmental commitment to climate-relevant policy with missions surrounding climate adaptation, healthy oceans, climate-neutral cities and healthy soils. Such goals and missions frame problems in specific ways, which result in particular demands for knowledge production. Other stakeholders, such as environmental movements, might provide different frameworks for these environmental issues and, thus, produce different demands for knowledge production. Therefore, we ask:

Thirdly, we aim to address the changing viewpoints and practices of scientists in response to anthropogenic climate change. Scientists are becoming increasingly vocal in expressing their concerns—writing both collective statements in academic journals (Ripple et al. 2020) and letters to influence public policy. Scientists have also turned to Twitter in order to engage and assemble various publics. Likewise, movements like Scientists for Future establish platforms for wider engagement. Scientists and scholars alike are seemingly changing their daily practices, in particular in relation to public engagement. Therefore, with this hub we strive to contribute to answering the question:

How and in which ways are scientists' communication and engagement practices changing in the Anthropocene?

Lastly, we seek to examine how scientists are increasingly reflecting on the science system itself. Scientists, especially those working in the Global North, produce large amounts of carbon dioxide by visiting international conferences—seen as important markers of academic status (Wynes et al. 2019). This immoderate use of air travel is increasingly contested in the context of the climate crisis (Higham & Font 2020). As scientists continue to reflect on the science system, and the types of knowledge needed to address the crisis, we raise the question of how the value of particular knowledge production practices may changes as a result:

How might/should research evaluation criteria change in the Anthropocene?

Science in the Anthropocene will bring together people and projects that engage with this theme from both within and beyond CWTS. We organize virtual seminars and small workshops inviting scholars who study the topics and questions we are currently working on at CWTS. We will explore in particular research, which employs combinations of methods including (but not limited to) bibliometrics, document analysis, interviews, and ethnography.

All events are open and inclusive.

The hub is coordinated by Thomas Franssen (t.p.franssen@cwts.leidenuniv.nl) and can be found on twitter at @scianthropocene.