Version 1.6.10 of our VOSviewer software, released today, offers support for many new data sources. Support has been added for Europe PMC, a large data source of biomedical literature managed by the European Bioinformatics Institute at the European Molecular Biology Laboratory, and Semantic Scholar, a data source and search engine for scientific literature developed by the Allen Institute for Artificial Intelligence. Support has also been added for the OpenCitations Corpus (OCC), the OpenCitations Index of Crossref open DOI-to-DOI citations (COCI), and Wikidata. In addition, VOSviewer now supports the file formats of the EndNote and RefWorks reference managers. This also enables VOSviewer users to work with data downloaded from the China National Knowledge Infrastructure (CNKI). Finally, VOSviewer’s support for Crossref and Dimensions has been extended. Like Europe PMC, Crossref can now be queried interactively within VOSviewer. Support for Dimensions has been extended with co-citation analysis, which previously was not available.

In this blog post, we present three illustrations of new features made available in VOSviewer version 1.6.10.

Creating a co-authorship map based on Crossref data

VOSviewer has provided Crossref support since October 2017. Users were expected either to provide a list of DOIs as input to VOSviewer or to query the Crossref API themselves. To simplify the use of Crossref data, VOSviewer now allows users to query the Crossref API interactively. For instance, suppose we would like to create a co-authorship map of researchers that have published in Journal of Informetrics between 2010 and 2018. We then simply enter the relevant search criteria in the Create Map wizard in VOSviewer, as shown below. 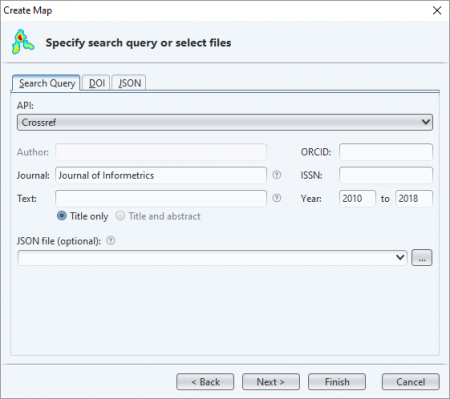 After going through the various steps in the wizard, VOSviewer creates the co-authorship map presented below. The map shows the network of co-authorship links between researchers that have published at least three articles in Journal of Informetrics in the period 2010–2018. 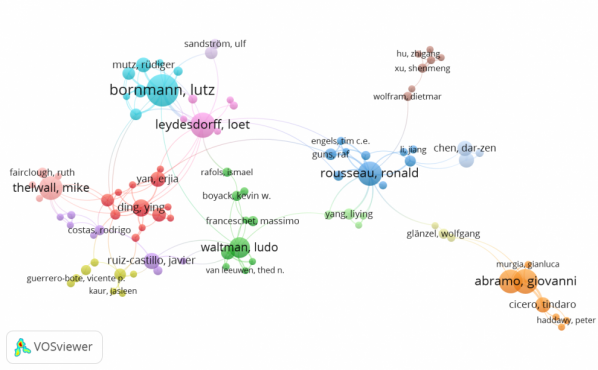 Creating a term map based on Europe PMC data

Like the Crossref API, the Europe PMC API can be queried interactively in VOSviewer. Compared with Crossref, Europe PMC has the advantage that it includes many more abstracts of publications. These abstracts are important for creating term maps. Suppose we would like to obtain a high-level overview of research on malaria published during the past two decades. We then search for all publications in the period 2000–2018 with ‘malaria’ in their title. Using the Europe PMC API, 27,704 publications are found. Based on the titles and abstracts of these publications, we create a term map that includes 747 terms, each occurring in at least 100 publications. An overlay visualization of this map is presented below. 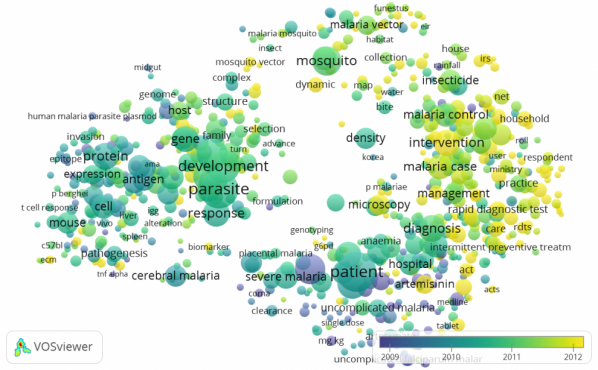 Creating a citation map based on COCI data

In 2010, we published the paper Software survey: VOSviewer, a computer program for bibliometric mapping in Scientometrics. We introduced the VOSviewer software in this paper. The paper has received many hundreds of citations. Suppose we are interested in a map of the citation network of publications that cite our VOSviewer paper. We use COCI data to create this map. COCI is a data source of citation links extracted from Crossref. Thanks to the Initiative for Open Citations (I4OC), hundreds of millions of citation links have been made openly available in Crossref and, consequently, also in COCI. 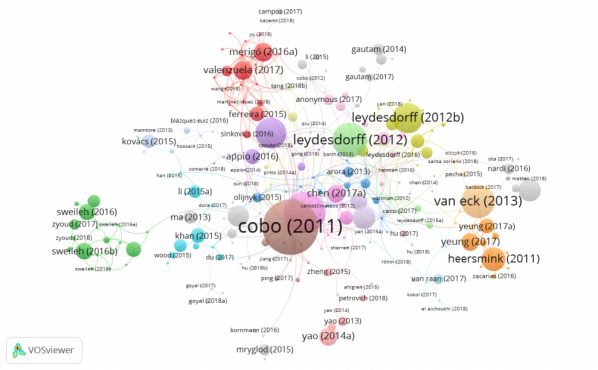 The new data sources supported by VOSviewer offer many interesting possibilities, especially because most of the new data sources are supported through APIs, enabling VOSviewer to directly retrieve data from these sources. However, we need to recognize that these APIs still have major limitations. For instance, due to limitations of the Crossref API, we face significant restrictions in the possibilities that can be offered by VOSviewer to query Crossref interactively. In the case of the APIs of Semantic Scholar, OCC, COCI, and Wikidata, VOSviewer currently is not able at all to support interactive querying. Europe PMC offers the most flexible API, but due to a technical issue, VOSviewer is not yet able to make use of citation data retrieved through this API. Some APIs are also quite slow, making it difficult to use them for large-scale analyses. We hope to work together with the providers of the various data sources to improve their APIs and to further enhance the way VOSviewer connects to their data sources. We also plan to provide support for additional data sources, such as Microsoft Academic.

Various other exciting developments are ongoing. In the context of a project funded by the Wellcome Trust Open Research Fund, we aim to provide support for full-text data sources in VOSviewer. In addition, we plan to make VOSviewer open source. We are also currently exploring the idea of creating a web-based version of VOSviewer. Furthermore, we are expanding the possibilities for VOSviewer training. On April 4 and 5, we will organize the course Visualizing Science Using VOSviewer in Leiden, the Netherlands (registration is still open), while in mid-April, VOSviewer training will be offered as part of the CWTS Scientometrics Spring School at Zhejiang University in China.

Finally, we would like to thank everyone who has contributed to realizing the new features offered in version 1.6.10 of VOSviewer. In particular, we are grateful to Silvio Peroni for his efforts in creating APIs for OCC, COCI, and Wikidata, to Zhan Huang for helping us understand the possibilities offered by the Europe PMC API, to Zhigang Hu for introducing us to CNKI, and to Christian Bode for his help in extending VOSviewer’s support for Dimensions.